About the SGI
SGI Project Team
Contact us with your questions, comments and suggestions.

Christof Schiller
Phone: +49 30 275788-138
Christof Schiller heads the „Sustainable Governance Indicators“ (SGI) project. He joined the Bertelsmann Stiftung in 2016 and, in addition to the SGI project, also worked on two projects that develop long-term solutions for an inclusive and dynamic labour market and sustainable social security systems as part of the “Shaping Sustainable Economies” and “Future of Work” programmes. Christof earned his diploma degree and doctorate (Dr. rer. pol.) in Public Policy and Management from the Faculty of Economics and Social Sciences of the University of Potsdam. He is the author of two monographs and numerous scientific articles, book chapters and policy reports. Christof has taught classes and held academic positions at the Hertie School of Governance in Berlin and the University of Potsdam, where he remains an associated Fellow of the Potsdam Center for Policy and Management. The main focus of his research is on comparative welfare state reform, public sector governance and employment policies. His latest book is The Politics of Welfare State Transformation in Germany. Still a Semi-Sovereign State? (Routledge, April 2016).

Thorsten Hellmann
Phone: +49 5241 81-81236
After training as an industrial administrator and in business management at the VWA in Bochum, Dr Thorsten Hellmann studied economics at the University of Münster and was awarded his doctorate in 2003. Since 2004, he has been working as a project manager for the Bertelsmann Stiftung, where he has spent several years analyzing national and international benchmarks for labor market, economic and social policy, as part of the Evidence-Based Policy Strategies program. He was i.a. responsible for the project “Benchmarking German States”, in which the German states were compared and assessed in terms of incomes, employment and security.

Pia Paulini
Phone: +49 5241 81-81468
Pia Paulini has worked for the Bertelsmann Stiftung in Gütersloh, Germany since 2000. Over the years she has served as the team assistant in various departments and projects. She has been a member of the SGI project since 2009.

Heike Beyer
Phone: +49 5241 81-81283
Heike Beyer has worked for the Bertelsmann Stiftung in Gütersloh, Germany since 1985. Over the years she has served as the project assistant in various departments and projects. She has been a member of the SGI project since 2022.
Why are qualitative assessments and quantitative data combined?
To operationalize and measure the concepts described in the Mission Statement, the SGI relies on a combination of qualitative assessments by country experts and quantitative data drawn from official sources. Neither of them is epistemologically superior to the other nor can they fully substitute for each other. Both types of observations have specific strengths: 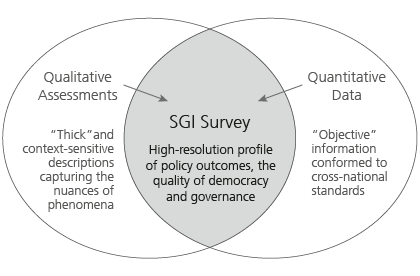 How is the subjective bias confronted?
The assessments of the SGI’s Expert Network - inherently subjective - undergo a six-stage peer review within a concise framework. This thorough process ensures the validity and reliability of expert assessments.
How does the survey process work?

The first country expert writes a draft country report and provides scores on a scale from 1-10. His or her work is based on the Questionnaire.


The second expert reviews this report, making comments and providing alternative and complementary content. He or she also provides scores independently of the first expert.

The Coordinator mediates between the two experts, ensuring a balanced report. Drawing on his or her regional expertise and the experts’ scores, the coordinator then provides his own scores.

Sector experts review the report and scores provided; point to remaining inconsistencies or gaps and give advice on how to remedy them (in consultation with the experts).

The eight coordinators meet to inter-regionally calibrate assessments. Each coordinator is required to explain, defend, and if necessary, recalibrate his assessments and scores.

The Advisory Board, comprised of renowned scholars and practitioners, discusses and approves the final scores.


The reports are subjected to a rigorous editing process, in form and content. Questions that arise are checked with the coordinators and experts. Final reports are published at sgi-network.org.


How are scores weighted and aggregated?
Combining the qualitative expert ratings with quantitative data yields the Survey Structure. In order to aggregate the indicators into composite indices, the quantitative indicators (which use varying scales and units of measurement) are standardized via a linear transformation. Long-term data series were used to set appropriate minimum and maximum values and calculate scores from 1 (worst) to 10 (best).

How is the SGI country sample composed?
The SGI examines 41 countries. The following illustrations show all sample countries according to their membership in the OECD, EU and eurozone, respectively. 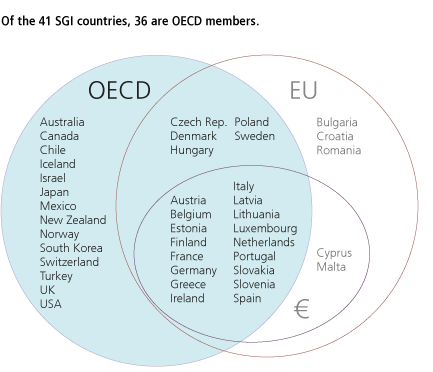 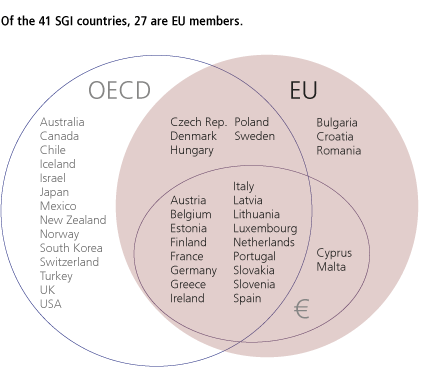 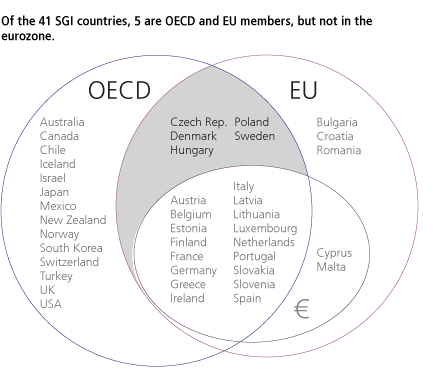